With the release of this data, I am heartbroken. But not because the results disappoint. I am crushed because this treatment is so promising, so safe, and so positively life-altering, yet my son still does not have access to an exon-skipping drug. My heart aches for Charley, who has been waiting years for a drug that could help him. Yet that drug sits on the shelf while the approval process for eteplirsen drags on year after year. And with each day that passes, the fate of the whole suite of drugs based on this incredible new chemistry becomes more uncertain.

There has been much debate about eteplirsen. But the data continue to indicate that the drug is safe and effective. Here are my key takeaways from today’s release:

Eteplirsen is slowing disease progression, and we need it approved now – both for the boys it can help today and for the boys who await the follow-on therapies that will only advance upon eteplirsen’s approval. I want to be very, very clear about what today’s results mean to the patient community, because for us, there is no debate.

Nothing illustrates this urgent point more clearly than the comparison of the placebo-delayed cohort to the boys who started eteplirsen from day one of the study. Four boys in the study were chosen at random to be put on placebo so doctors could see if they performed any differently than boys who started the drug from day one. As expected, the placebo group experienced a sharp decline during the first six months. This did not happen to the treated cohort, so the placebo boys were crossed over to drug. And then an amazing thing happened.

In fact, I would go so far as to call slide 14 from Sarepta’s SEC filing today “startling.” I even added some arrows and notes to make the point crystal clear. Take a look at the two lines below. The purple line shows the six-minute walk test results for the boys who started the drug from the beginning of the study and can still walk. The orange line shows the scores for the boys who were on placebo for the first six months of the trial. The orange line starts out as a sharp downward plunge, but then transforms into a long, gentle slope once the boys cross over to drug and dystrophin starts to appear in their muscle fibers. 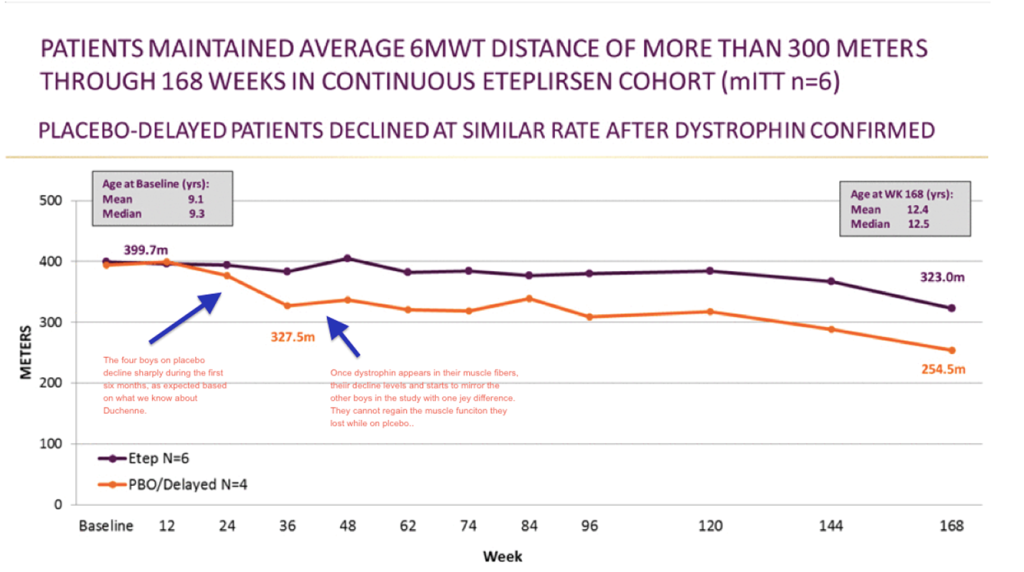 What’s remarkable is that once the drug kicks in, the lines represent mirror images of one another, with one key difference: the orange line consistently lags 60 meters behind the purple line. That’s because while they boys in the placebo-delayed group were being injected with clear saline instead of drug, they lost function that cannot be recovered.

While these two lines become virtual mirror images once all boys are on drug, they are absolutely not parallel with the natural history. A recently published study followed boys with Duchenne for three years and concluded, “Those above the age of 7 years showed a progressive deterioration that was much more marked with each increasing year after baseline.”

The urgent message is clear: We need to start boys on treatment early to save as much muscle as possible.

After 3.2 years of weekly infusions, there have been no drug-related adverse events. In the world of drug development this is a wonderful rarity, but not surprising at all to those of us who have been closely following the development of this particular therapeutic approach for years. The drug’s “charge neutral” chemistry means we knew the drug was unlikely to have unwanted off-target effects. In fact, in preclinical studies, animals have been repeatedly dosed up to 320 milligrams per kilogram with no signs of toxicity, more than 10x the dose the company is giving to children. This drug is safe.

What does stabilized lung function mean?

Respiratory failure is one of the leading causes of death in Duchenne. Yet this data shows that not only do all 12 boys have stabilized lung function, three of four respiratory measures IMPROVED since the 144-week data. That is absolutely remarkable. The natural history shows that untreated boys experience a consistent decline in respiratory function beginning around age 7.

Have the boys slowed down some since the last data was released at 144 weeks? Of course. This drug always intended to transform Duchenne into a milder form of muscular dystrophy called Becker. It intended to improve quality of life, which it has done, but it never promised to cure the disease. It is intended to be the first line of defense against a brutal, aggressive killer. It is expected that in the coming years, this first-line therapy will be complemented by drugs that reduce fibrosis and increase muscle mass and upregulate compensatory proteins, all of which together could give kids with Duchenne long and healthy lives. But our children will never get there if we don’t start right now.

For far too many boys, it is too late. Fifteen-year-old Nathan. Fourteen-year-old John. Fifteen-year-old Joshua. For these boys who died this past week, the window of opportunity has closed. The FDA must act now to protect the children who still have a chance. AIDS too was a death sentence, until AZT was approved as a first step. Today most HIV patients are treated with a cocktail of therapies, and the prognosis has made a 180-degree turnaround. My son Charley wants to be a millionaire businessman. If we get him on drug before it’s too late, he could be the next Magic Johnson in more ways than one.