Drug company Sarepta announces that after 36 weeks of dosing, DMD participants using eteplirsen outperformed the placebo. The company had demonstrated three months earlier that eteplirsen results in the production of significant levels of dystrophin, the protein boys with Duchenne are missing.

Sarepta requests a meeting with the FDA to determine whether the drug can be eligible for accelerated approval.

The FDA expresses a willingness to consider a New Drug Application (NDA) for eteplirsen, stating in written meeting minutes: “with additional data to support the efficacy and safety of eteplirsen for the treatment of DMD, an NDA should be fileable.”

The FDA reverses course, calling the NDA “premature,” despite the continued success of clinical trials.

During “Rare Disease Week” parent advocates respond to the reversal by launching a nationwide campaign urging the FDA to “Say Yes” to an Accelerated Approval Pathway for safe, effective therapies. The Race to Yes brings a panel of DMD experts from all over the world to meet with and help educate FDA officials.

Dozens of media outlets publicize the effectiveness of The Race to Yes and its national grassroots campaign. 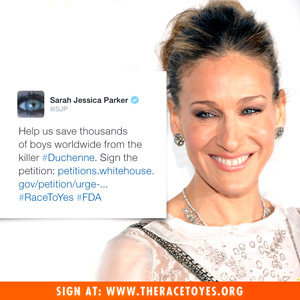 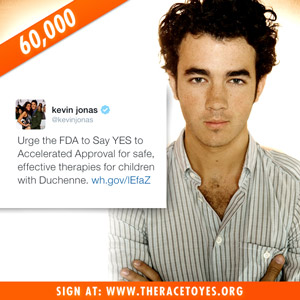 Drug manufacturer Sarepta finally receives the guidance from FDA it had been seeking since December 2012.

The Race to Yes waits several months for a response to the White House Petition.

The FDA Commissioner finally replies to The White House petition pledging to “explore the use” of the accelerated approval pathway for DMD treatments.

Finally ready to review the new drug application, the FDA tentatively schedules a meeting of an independent advisory committee in November 2015. The meeting date is then inexplicably postponed until a date to be determined. A coalition of patient advocacy groups requests an explanation as to why the meeting was postponed. After more than a month, the FDA responds and says that they are unable to comment. We are still waiting for real answers.